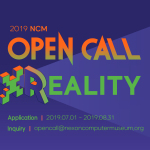 – No limitation in platform, genre or theme if applicable to VR, AR, MR contents

NCM OPEN CALL is an exhibit to discover and support virtual reality content creators. This year’s keyword ‘X REALITY’ encompasses all kinds of virtualization including VR, AR, MR, and more. It also implies eXtended Reality, which broadens the perspectives of reality, and Cross Reality, which overlaps the real and virtual world. The unpredictable X signifies NCM OPEN CALL’s pursuit towards embracing various kinds of innovative and challenging interpretations of virtualization.

There is no limitation in platform, genre, or theme if it is an XR content, and anyone can apply regardless of their nationality, age, gender, or field experience. If there are a demonstration video and a playable build file that explicitly shows the core intent of the work, projects still under development are also received. Applications will be received from July 1st until August 31st, and the winners will be announced on October 25th.

The total amount of prize money is KRW 13 million. The winner for the most innovative content will receive KRW 5 million, while the winners for the best and the excellence in the categories of VR and AR will receive KRW 3 million and KRW 1 million respectively.

The winning team will be given the opportunity to become next year’s NCM Accelerator through further screening. NCM Accelerator is Nexon Computer Museum’s annual sponsorship program that supports potential creators continue their work in a stable environment. 8 teams that have been selected as the Accelerator for the past two years have received over KRW 100 million in total. iNK STORIES, last year’s NCM OPEN CALL winner, will receive about KRW 20 million worth of support in 2019.