LOS ANGELES–(BUSINESS WIRE)–This Fall, GUESS is proud to announce it is continuing a multi-faceted partnership with multiple Latin Grammy award winner, J. Balvin, by collaborating with artists, FriendsWithYou. This fashion collaboration will travel with J. Balvin’s upcoming Arcoiris North America Tour starting September 11th and continuing through all U.S. tour stops and select GUESS retail stores in cities where the tour will stop. 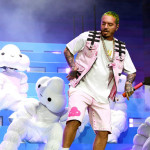 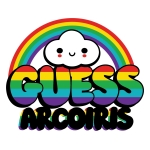 GUESS will be launching a limited edition 8-piece capsule ranging from $29 – $108. The collection includes a selection of graphic long-sleeve and short-sleeve t-shirts in both black and white solid colors and are accompanied by unique vibrant tie-dye prints, also offered in two hoodies. The full assortment of merchandise will be available for sale at the concert venues.

“Earlier this year we had a great opportunity to align with J. Balvin and FriendsWithYou on his debut Coachella performance. Between FriendsWithYou designing the visual stage elements and Guess designing Balvin’s wardrobe there was definitely a special synergy created. I admire the work of both Balvin and FriendsWithYou because they continue to radiate positivity, happiness, and colors to the world. We are all very excited to come together and collaborate on this capsule in support of the Arcoiris tour.” – Nicolai Marciano

“It’s important to me to give my fans a complete experience from the music to the art and the clothes. Thanks to my Guess family, FriendsWithYou and I were able to take things to the next level with this limited edition capsule collection.” – J. Balvin

“This collaboration with J. Balvin was such a powerful project to us. We feel we were able to transmit love through the combination of the sound & vision, creating an experience of joy. Working with GUESS to make the vision complete, with pieces of clothing that transmit the same positive feeling that people can carry with them, has been a huge honor.” – FriendsWithYou

GUESS x FriendsWithYou for J. Balvin Arcoiris Tour concert merchandise will be available at select GUESS stores in surrounding cities that correspond with the tour stops and on guess.com starting September 13, 2019. The full assortment will also be available at all tour venues starting with the first stop on September 11th, 2019.

Established in 1981, GUESS began as a jeans company and has since successfully grown into a global lifestyle brand. GUESS?, Inc. designs, markets, distributes and licenses a lifestyle collection of contemporary apparel, denim, handbags, watches, eyewear, footwear and other related consumer products. GUESS?, Inc. products are distributed through branded GUESS?, Inc. stores as well as better department and specialty stores around the world. As of August 3, 2019, the Company directly operated 1,162 retail stores in the Americas, Europe and Asia. The Company’s partners and distributors operated 562 additional retail stores worldwide. As of August 3, 2019, the Company and its partners and distributors operated in approximately 100 countries worldwide. For more information about the Company, please visit www.guess.com.

Hailing from Medellín, Colombia, José Álvaro Osorio Balvin – better known to a legion of global fans as J. BALVIN – has been praised by Billboard as “the biggest breakout act Latin music has seen in many years.” With a distinctive style all his own that pays reverence to the first-wave of Reggaeton stars from Puerto Rico, but fused with additional Colombian and mainstream hip-hop rhythms, more seductive than boastful lyrics, and a strong passion for fashion, J Balvin has become the undeniable leader of a second-generation Reggaeton revolution propelling Urban music back to the forefront of Latin music worldwide. Between his game-changing major-label debut album LA FAMILA, multiplatinum successor ENERGIA (The #1 Latin album of 2016) and recent landmark singles such as Mi Gente, and Machika, J. Balvin quickly notched ten #1 Latin singles, Over 50 million social media followers, and over TEN BILLION Total YouTube Views. With his distinctive style and chart success, J. Balvin has also become one of Latin music’s most in-demand collaborators, having now worked with artists, such as Beyoncé, Justin Bieber, Cardi B, Pharrell Williams, Ariana Grande, Liam Payne, Major Lazer, Juanes, Camilla Cabelo, Nicky Jam, and more. Major award recognition has also followed, as J. Balvin holds a Guinness World Record for the longest #1 run for a solo Latin single, has won back-to-back Latin Grammy Awards, multiple Billboard Latin Awards, BMI’s Songwriter Award for Contemporary Latin Song of the Year, and overall ARTIST OF THE YEAR recognition two years in a row at Univision’s Premio Lo Nuestro. J. Balvin’s recently released new album VIBRAS has been hailed by TIME. Rolling Stone, Billboard and more as: “One of the Best Albums of 2018” ­while also propelling the Colombian star to #1 rankings on both YouTube & Spotify’s global charts as this summer’s #1 streaming artist in the world.

FriendsWithYou is the collaborative art project of Los Angeles based artists Samuel Borkson and Arturo Sandoval III, working collectively since 2002 to have a positive impact on our world. Known for their immersive installations and inflatable sculptures, their work reaches beyond the contemporary art world into popular culture. Their mission is to use art as a tool to heal, empower and encourage people to love themselves and be compassionate towards each other and our world. They are constantly evolving within the mediums they work with, from painting, sculpture, live performances, to virtual reality and animation. They have created an accessible and honest language to cultivate moments of spiritual awareness, powerful, joyous, and communal interactions, all on the journey to the unknown – an exploration with the hopes to connect the world.