ANAHEIM, Calif.–(BUSINESS WIRE)–Disney on Broadway is thrilled to return to D23 Expo, in Anaheim, California, to celebrate its 25th anniversary. Join Broadway’s brightest stars as they present an exclusive concert, Disney on Broadway: A 25th Anniversary Celebration, in Hall D23 on Saturday, August 24, at 3:30 p.m. 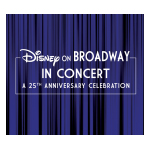 About Disney on Broadway: A 25th Anniversary Celebration performers:

(Talent is subject to change)

Heidi Blickenstaff most recently created the body-swapping role(s) of Katherine (and Ellie) in Disney’s Freaky Friday for Disney Channel and Disney Theatrical Productions (Helen Hayes and Outer Critics nominations). On Broadway, Heidi was most recently seen as Bea Bottom in the 10-time Tony-nominated Something Rotten! (Outer Critics and Grammy® nominations). Disney on Broadway audiences might remember Heidi as Ursula from Disney’s The Little Mermaid. Other Broadway credits include The Addams Family (Alice Beineke), The Full Monty and Tony-nominated [title of show], the original Broadway musical Heidi and her friends made about four friends making an original Broadway musical. Some favorite regional shows include Next to Normal (Diana) at the Weston Playhouse and First You Dream: The Music of Kander & Ebb at the Kennedy Center, Signature Theatre and recorded for PBS. Heidi can be seen and heard on the DVDs of Freaky Friday and PBS’s First You Dream as well as on many Broadway and concert albums available wherever music and DVDs are sold. www.heidiblickenstaff.com

Ashley Brown originated the title role in Mary Poppins on Broadway for which she received Outer Critics, Drama League and Drama Desk nominations for “Best Actress.” Ms. Brown also starred as Mary Poppins in the national tour of Mary Poppins where she garnered a Garland Award for “Best Performance in a Musical.” Ms. Brown’s other Broadway credits include Belle in Beauty and the Beast, as well as starring in the national tours of Jack O’Brien’s The Sound of Music and Disney’s On the Record. Ms. Brown has starred in both Oklahoma! and Showboat at Chicago’s Lyric Opera and has performed with virtually all of the top orchestras in North America including the Boston Pops (twice), the New York Philharmonic, the Hollywood Bowl Orchestra at Disney Hall, the Pittsburgh Symphony, the New York Pops at Carnegie Hall (five times), Fort Worth Symphony, the Cincinnati Pops and Philadelphia Orchestra (twice). Ms. Brown’s PBS special called Ashley Brown: Call Me Irresponsible received a PBS Telly Award. Other television credits include NBC’s The Sound of Music. Ms. Brown is the voice of Disneyland celebrating its 60th anniversary singing the newly penned Richard Sherman song “A Kiss Goodnight.” Ms. Brown’s album of Broadway and American Songbook standards, Speak Low, and her newly recorded Christmas EP, The Secret of Christmas, are available on Ghostlight/Warner Brothers.

Gavin Lee just finished playing Lumière in Disney’s Beauty and the Beast. In New York, he most recently played the Grinch at Madison Square Garden. Before this, he originated the role of Squidward in SpongeBob SquarePants the Broadway Musical (Drama Desk Award and Tony Award nomination). Before that, he played Thenadier in the Broadway revival of Les Misérables. He originated the role of Bert in the West End and Broadway productions of Mary Poppins (Drama Desk and Theatre World Awards, Olivier and Tony Award nominations). Gavin has appeared at Carnegie Hall in Showboat and in the world premiere of Holiday Inn at Goodspeed Opera House. TV credits include Law and Order: SVU, The Good Wife and White Collar. His favorite London theatre credits include Top Hat, Crazy for You, Peggy Sue Got Married, Me and My Girl, Over My Shoulder, Oklahoma!, Contact and Singin’ in the Rain. Gavin has performed his solo cabaret in New York, Chicago and on Disney Cruise Line.

Kissy Simmons is a native of Floral City, Florida, and graduated from the University of South Florida with a B.A. in Speech Communications. She was also a NCAA Division 1 Track and Field athlete. Kissy grew up playing the keyboard and singing in church, and was a State Champion high jumper at Citrus High School. After graduating from the University of South Florida, she got her professional theatre debut at the David A. Straz, Jr. Center for the Performing Arts where she was seen in Little Shop of Horrors (Ronnette), Jacques Brel and other seasonal cabaret shows. Broadway credits include: The Lion King (Nala). First national tour: The Lion King (Nala). Las Vegas: The Lion King (Nala). TV credits include Smash, Hope & Faith, 30 Rock, 6 Degrees and many commercials, voiceovers and print. Thank you, God for your grace and to my biggest fans Anthony and Sadie!

Josh Strickland is a native of Charleston, South Carolina. In 2006, Strickland created the leading role of Tarzan in Disney’s musical Tarzan®on Broadway. In 2009, he made his starring Las Vegas debut in Peepshow at Planet Hollywood Casino & Resort while concurrently co-starring in the hit E! reality show Holly’s World. Strickland debuted his first single “Report to the Floor,” which skyrocketed to the top five on the iTunes Dance Charts the first week of its release, followed by “Last Dance.” In 2013, Strickland joined the cast of Vegas! The Show at the Planet Hollywood Casino & Resort in Las Vegas in a starring role. Strickland has also appeared internationally with the all-star cast of Disney’s Broadway Hits, including the Emmy-winning concert at Royal Albert Hall in London, England. He most recently reprised his role as Tarzan in Disney’s musical Tarzan® in Oberhausen, Germany at the Stage Metronom Theatre. Twitter & Instagram: @joshuajstrick

Alton Fitzgerald White performed a record-breaking 4,308 performances as King Mufasa in The Lion King on Broadway. Alton recently added author and keynote speaker to his list of titles. His book, My Pride: Mastering the Challenge of Daily Performance, filled with secrets to fulfillment and joy in work and life, was recently published by Disney Editions. Other Broadway starring roles include Mister in The Color Purple, Coalhouse Walker Jr. in Ragtime, Ken in Smokey Joe’s Cafe, John in Miss Saigon and The Hawker in The Who’s Tommy. Alton has performed concert dates all over the world. His best-selling CD Disney My Way!, along with autographed copies of his Disney book, are available at www.altonfitzgeraldwhite.com. Alton has had guest star roles on the hit TV series Law & Order, Bull, The Blacklist, The Good Fight, Code Black, Elementary, Mindhunter and Madam Secretary. He was most recently featured in the Pulitzer Prize-winning production of Rent which was performed live on Fox television. Please join him on his Facebook fan page, @WhiteAlton on Twitter, and @Alton2459 on Instagram.

CLICK HERE to download production photos and talent headshots in support of Disney on Broadway: A 25thAnniversary Celebration.

Single-day tickets for Friday and Sunday of D23 Expo 2019 are available for $89 for one-day adult admission and $69 for children 3–9. Gold Members of D23: The Official Disney Fan Club can purchase tickets for $77 for a one-day adult admission and $59 for children 3–9. Single-day Saturday tickets and three-day passes are sold out. For more information on tickets and D23 Expo 2019, visit www.D23Expo.com.

Disney Theatrical Productions (DTP), a division of The Walt Disney Studios, operates under the direction of Thomas Schumacher. The group produces and licenses Broadway productions around the world, including Beauty and the Beast, The Lion King, Elton John & Tim Rice’s Aida, TARZAN®, Mary Poppins, a co-production with Cameron Mackintosh, The Little Mermaid, Peter and the Starcatcher, Newsies, Aladdin and Frozen. Other successful stage ventures have included the London hit Shakespeare in Love, stage productions of Disney’s High School Musical, Der Glöckner Von Notre Dame in Berlin and King David in concert. DTP has collaborated with the country’s leading regional theatres to develop new stage musicals including The Jungle Book, The Hunchback of Notre Dame and Freaky Friday.

D23 Expo—The Ultimate Disney Fan Event—brings together all the worlds of Disney under one roof for three packed days of presentations, pavilions, experiences, concerts, sneak peeks, shopping and more. The event provides fans with unprecedented access to Disney films, television, games, theme parks, and celebrities. For the latest D23 Expo 2019 news, visit D23expo.com. Presentations, talent and schedule subject to change. To join the D23 Expo conversation, be sure to follow DisneyD23 on Twitter, Facebook, Instagram and YouTube, and use the hashtag #D23Expo.

The name “D23” pays homage to the exciting journey that began in 1923 when Walt Disney opened his first studio in Hollywood. D23 is the first official club for fans in Disney’s 90-plus-year history. It gives its members a greater connection to the entire world of Disney by placing them in the middle of the magic through its quarterly publication, Disney twenty-three; a rich website at D23.com with members-only content; member-exclusive discounts; and special events for D23 Members throughout the year.

NOT FOR PRINT: For images, press releases, and the official media credential application, please visit www.D23ExpoPress.com.